Showing posts from November, 2011
Show all

1. “WHOA!” That was the first word blurted when I read the news about the program called SEXUALITY MERDEKA 2011 organized with the official tag of creating awareness to the public about LESBIANS, BISEXUALS, GAY & TRANSEXUALS (LBGT) and about their rights in leading their lives their own ways. I verily believe this is the first of its kind and frankly, this is the first time that I see such a program being organized in Malaysia. 2. Though this program received full support from several organizations like Bar Council and SUARAM yet many parties, religious bodies and Non- Governmental Organizations (NGOs) despised and protested to the organizing of such program. The protesting parties cried out and loudly said that it is not at all acceptable and in defying the divine ordain. Police reports had also been made and last I knew the police had declared a ban on such program. 3. A friend asked me for my personal opinion on this issue. His cynical tone really is sickening since I am a mem
Post a Comment
Read more 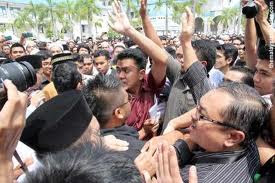